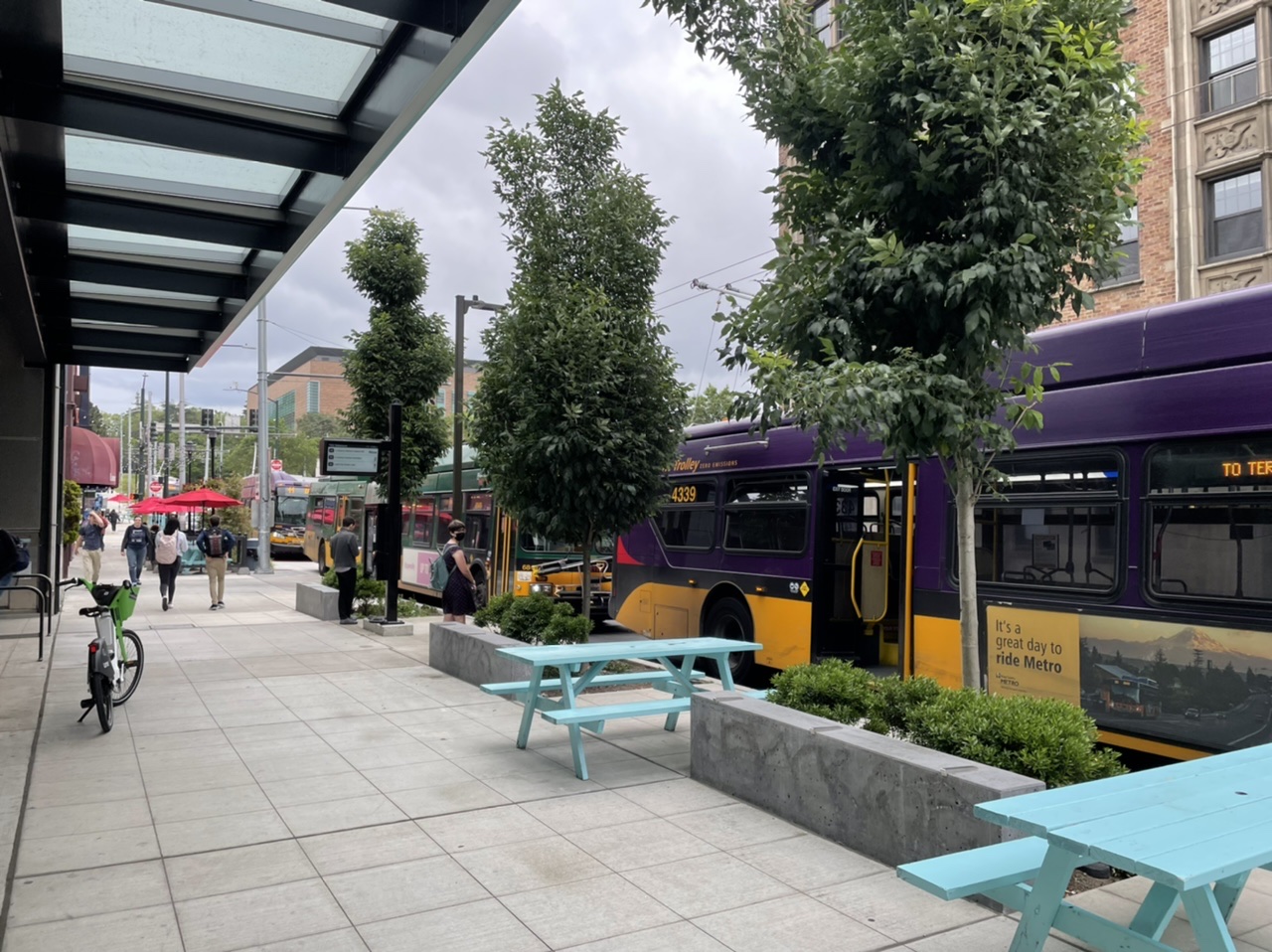 This Transpo Notes roundup tackles a mix of transit stories, including:

Users of the link may soon begin to notice the appearance of digital advertising screens in stations. Wednesday, Urban planner Transportation reporter Ryan Packer tweeted about multiple screens at Capitol Hill Station. Reached by email, Sound Transit spokesman John Gallagher said the pilot program will total 20 screens, including “two screens in the UW station, four in Capitol Hill, six in Westlake, six in University Street, one at the stadium and one at SeaTac/Airport.”

Only three stations currently have functioning screens, Gallagher said, including University Street, University of Washington and Capitol Hill stations, but that trend is expected to accelerate rapidly with “all but three screens…functional by the end of the day.” mid August”. Gallagher added that “the last three screens at Westlake will not be installed until the end of October once the ticket machines are removed from this station to make room for them.”

The screens were originally scheduled to be installed starting in the spring, but detailed engineering was still underway at the time. More stations will eventually get digital advertising screens, which will provide more and more revenue to the agency. By the 13th year of the deal with Intersection – the company providing the screens – revenues will reach nearly $2 million per year with only a very low prevalence of screens. As part of the deal, Sound Transit will eventually own the equipment, while Intersection will be responsible for its maintenance. Sound Transit may also use certain advertising space for agency campaigns, such as customer etiquette and safety messages.

Security incidents down on Sound Transit but still high

In absolute numbers, Sound Transit has saw an improvement in safety across the transit system since 2020. Reported security events fell 25% in 2021 across all categories except medical incidents. Vandalism, biohazard, vagrancy and trespassing rates were all lower than 2019 figures. However, medical incidents reached 1,018, well above the 692 and 770 incidents reported in 2020 and 2019 respectively.

A big caveat to consider alongside improving safety trends is that overall Link ridership was still down in 2021 compared to 2019. This means that the number of incidents traffic-related safety issues are in fact still high, and therefore more frequently experienced by passengers than in 2019. the past. On Saturday, a serious incident occurred on a Link train heading to Stadium Station when a the pilot pepper sprayed about eight other pilots, then fled.

At last week’s meeting, Claudia Balducci, King County Council Member and Sound Transit Board Member, mentioned that a a Bellevue Transit Center runner was brutally beaten in mid-July and later died injuries sustained in the attack. She said safety must be a top priority to maintain pilot confidence. “Part of providing a system where people need to go is making sure they’re safe when they do,” Balducci said.

Sound Transit has a contract with the King County Sheriff’s Office for patrols and contracts with three security companies. To address staffing challenges, the agency approved another security contract with a service provider in July. The agency is also evaluating activation strategies at stations, particularly Mount Baker, to promote community, economic and safety development.

The sound transit is seeking feedback on its 2023 service plan until August 16. Overall, the proposed service plan recognizes the staffing shortages that transit agencies are facing regionally and does not provide a meaningful resolution to the planned service delivery on the ST Express bus network. . Link and Sounder managed to see some restoration of service – although the latter experienced widespread delays and contractor mismanagement.

By 2021, the agency had developed a much more optimistic plan to augment and consolidate ST Express bus service for Pierce County and Snohomish County routes. While Route 535 improvements were partially completedplans have largely stumbled as transit operator retirements, resignations and promotions forced emergency reductions on bus routes, including discounts of approximately 20% off routes operated by Pierce Transit, 10% off routes operated by Community Transit, and 5% off routes operated by King County Metro. Sound Transit has taken steps to ease the pain by moving Route 566 operations from Pierce Transit to Metro to avoid further service cuts.

Functionally, the service plan does not alter planned services, leaving the door open to service restorations and plan implementation if staffing conditions improve. Sound Transit expects lower service levels on Routes 566, 577, 590 and 592 than approved service levels and substantial changes to Route 580. The service plan proposes the removal of the SR 512 segment from Route 580, which includes stops at SR 512 Park-and-Ride and Lakewood Station. Instead, Route 580 would only operate between Puyallup Station, the Red Lot and the South Hill Park & ​​Ride lot and its service would be coordinated with Pierce Transit’s Route 400 to meet specific trips from Sounder.

It’s hard to be optimistic about the shortage of transit operators, in part because local elected officials have shown no signs and no sympathy for service cuts in the transit system. Their inaction directly exacerbates a decline in transit service even though they have many tools at their disposal to improve staffing conditions.

Last week, the Sound Transit Board of Directors adopted updates to the agency’s disparate impact and disproportionately burdensome policies on populations protected by Title VI, which prohibits discrimination based on race, color, or national origin in any program or activity receiving federal funding. The Federal Transit Administration requires local transit agencies to measure the impacts of decisions related to these policies to understand how low-income and minority populations might be affected. The changes are the following:

Stephen is a professional urban planner in Puget Sound with a passion for sustainable, livable, and diverse cities. He is particularly interested in how policies, regulations and programs can promote positive outcomes for communities. With stints in big cities like Bellingham and Cork, Stephen currently lives in Seattle. He primarily covers land use planning and transport issues and has worked for The Urbanist since 2014.